Before the last General Election, we published CROSS, a comic anthology full of political satire, humour and a healthy dose of vitriol.

So: here it is: CROSS. Exactly the same book we published two years ago!!

What you won’t find in CROSS: strong and stable Theresa May, feisty and fabulous Nicola Sturgeon, Jezza, any hint of a thing called Brexit, or even the tiniest mention of The Donald.

Yes! Throw yourself back to the heady days of 2015 – and buy your copy now!

Seriously: why buy a book of satirical comics that’s out of date? Because some shit hasn’t changed. Austerity still has its jaws clamped around us all; food banks get more visitors than food courts; the old still vote while the young get shoved aside; and there may still be something out there to laugh about…

Buy your copy of CROSS now for just £5 plus P&P at http://www.comicsy.co.uk/disconnectedpress/store/products/cross-a-political-satire-anthology-2/

Alternatively, find us at Swansea Comic and Gaming Con on 27 May 2017 – http://scgcon.blogspot.co.uk/ 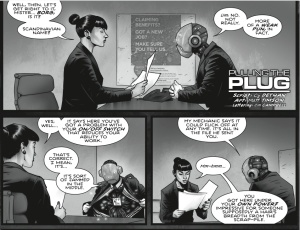