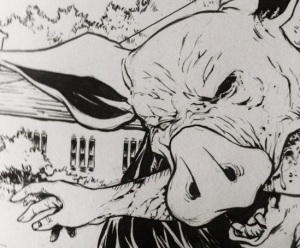 August 2013. An unsuspecting farmer unleashed a plague that no-one could have predicted.

They were somehow quite intelligent.

They were the Sentient Zombie Space Pigs – and they are coming back!

Yes, we’re delighted to announce that Issue 2 of Sentient Zombie Space Pigs will be launching on 30 August at Melksham Comic Con, one year on from the debut of Issue 1. And we can confirm that we’re holding the cover price steady at just £1. Yep, 100 pence for 20 whole pages of porcine panic, bacon brutality and downright Ham-a-geddon.

Once again, dear readers, we are giving you the chance to leave your bloody hoofprint on our comic. After the success of last year’s competition – and because we can’t think of anything different – here’s The Very Same Competition!

What to do? We have always been impressed by comics and books that have marvellous quotes on them to tell you how good they are. “A tremendous piece of work!” “A bold new direction for comics!” “Not bad!” – that sort of thing.

We’d like you to provide us with a quote. Two conditions: one, you don’t get to read the comic first (!) and two, it must feature a pig-based pun.

Spread the word. The SENTIENT ZOMBIE SPACE PIGS are coming – back!